An often overlooked area of gambling is efficient money management. Betting is all about weighing up the odds and coming out on top in the long run. There are a number of betting systems and strategies, some used by professionals, so why not do the same things they do?

One of the best pieces of advice is to try out your betting online using these systems before using real money! You can practice by using the strategies in fun casino games, still do not forget that when playing for real you have to be 10 times more careful. There are three main betting strategies: 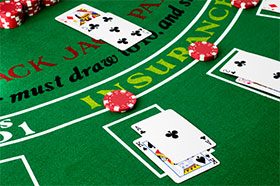 It is important to remember that not all of these strategies will work, all the time. Betting strategies have been the subject of much research – often involving complex mathematical equations. That in itself is proof that there is no easy answer as to which system is best. Each player needs to work out which is the best strategy for their own style of gambling.

Some players work on the theory that if a number hasn’t come up for a certain number of games then the probability of it occurring increases. Although this seems like common sense, it is in fact a common fallacy.

Consider a simple coin toss. If you’ve tossed five heads in a row, you would think the chances of a tail occurring would be high. But the likelihood of a tail on the next coin toss is still 50/50. And, in gambling, it’s the next game that counts! One of the most popular theories that pokies and video poker players use is that the machine can become hot after it has not been paying for a while, and cold if it has just paid out a big win. Yet this strategy doesn't work, not for real gaming machines, not for online slots and video poker.

A negative progression strategy, the Martingale strategy says on every loss you should double your bet. The theory behind this system is that a losing streak won’t continue forever and when the inevitable win comes, it can’t just be any win. You must be betting enough to gain back your previous losses. After the win, you betting amounts return to normal and, hopefully the normal flow of wins and losses will resume. The whole idea behind this type of strategy is to counter an unexpected run of losses, and regain your losses in the shortest period of time – to get you back in the game.

In theory, this should work but it is dangerous way to bet because you don’t know how long the losing streak will be, and some casinos have house limits which will negate the strategy by preventing the bet that may help you regain your losses! This strategy is good to be used when you play roulette as well as a part of strategy on how to win at pokies.

This system is similar style to the Martingale betting system but more reliable. Instead of simply increasing bet size after a loss, a player would also decrease bets after every win. This has the effect of smoothing out returns as it not only assumes a losing streak will end, but that after every win, a loss becomes more likely.

The opposite of negative progressive systems, the Paroli System increases bet size after every win. It assumes a winning streak will sometimes occur and aims to maximize the payout from consecutive winning bets. Of value to some players is that the system does not require a large bankroll, as bets return to normal after a loss.

More commonly used on the track, especially on glamour days like the Melbourne Cup, players take the winnings from one bet and add them to the next bet. Although a positive progression strategy, it is reasonable safe as the bet size returns to normal after a loss. Before playing, it’s a good idea for players to set their bet limit before taking profits. This system is good for table games including classic blackjack, vegas strip blackjack and baccarat.

This strategy involves the assumption that sooner or later a player will have a four game winning streak. Although complex mathematical formulas have been used to develop the system, it’s a simple strategy to implement.

The 1-3-2-6 system takes the best from positive and negative progression strategies. It assumes two wins in a row will be common and three in a row less likely. To win four in a row is tough, but the system will pay off though the six unit bet on the fourth win.

The difficulty with this system may be with the player’s own discipline. After the third consecutive win, it may be hard to risk all the winnings on the next game!